Please sign the petition for the banning of Neonicotinoids

Neonicotinoids are killing our bees. Please sign the petition to have them banned in the UK.

For more info and to sign our petition please visit:http://www.soilassociation.org/bees.aspx
Posted by Stephen at 12:13 2 comments:

I visited my apiary at D's today, with son Joe (who took the photos).

I try to make this a low-impact hobby - so we cycled there. Only a couple of miles. 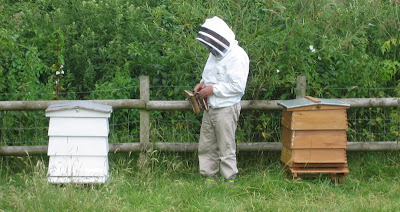 There are two hives there. One painted traditional white gloss, the other brushed with beeswax/linseed oil mix. Which do you prefer? Both are well-protected against the weather.

The guard sheep are still there - recently shorn, I think.

(My spellchecker doesn't like "shorn". Surely that's the right spelling? Yes, dictionary.com says that's OK. Must be the blogger spellchecker.)

Example frame from the super (ie above the queen excluder, so containing stores only.). This one is 100% nectar - no pollen at all. Looks very clean on new frame and new foundation, doesn't it? 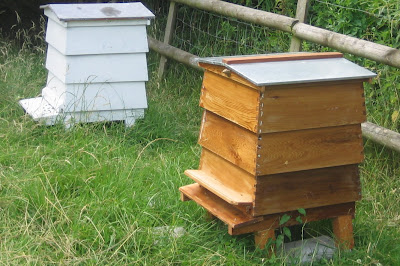 These two colonies were new this year - so they're doing very well. Colony one has capped 80% of each of eight frames - the remaining two are not yet drawn out. So I'll need to put on a new super. So that's about 7kg of honey gathered in two months, from a colony that started out as a swarm in May.

The other colony is a bit behind. it has filled its brood box with stores, and drawn out half the frames in the super that I gave it six days ago.

But Colony Two has an iffy queen. There are four frames of brood - but I was expecting more. It's an odd shaped brood - suddenly stopping at frame four.
Posted by Stephen at 18:11 No comments: