Bees on the ivy

Three photos taken today whilst Mrs S was collecting sloes for her gin. Normally sloshes it back with the merest hint of tonic, but she wants to make some Christmas presents. Bottle of Sloe Gin, Jar of Honey, pound of plum jam - what's not to like?

The first is of a bee with a lorra lorra pollen. Note the two big arange stripes on the abdomen - I think that makes her an italian strain. Well, she was flapping her wings a lot and nipping from flower to flower, so I think that must be right. 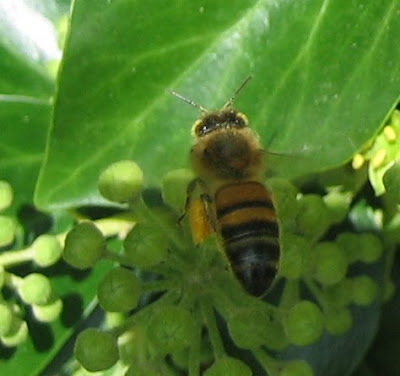 The second is a rather venerable old worker - she has lost most of her hair. Her black abdomen marks her out as an English strain. She worked the same flower head for about five minutes with infinite patience. 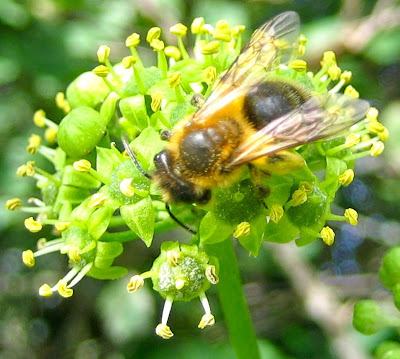 Third one has rather odd markings - the orange band doesn't go right across. 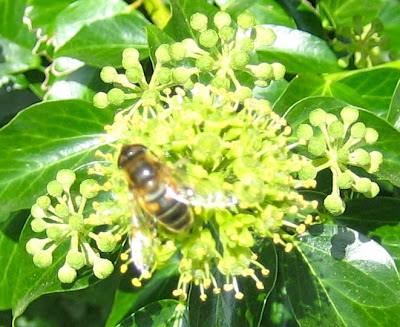 If you have a chance, go an sniff some ivy flowers. You'll be surprised by the rank smell - a bit like a wet bed full of bedbugs (older readers only perhaps). That's what the honey smells like.

My new friends C and L gave me a pot of ivy honey and I made some experimental flapjack for sale at the honey show last week (sorry no photos - I was in the catering tent all day). I thought the flapjack was disgusting, but it all sold, even with a health warning. 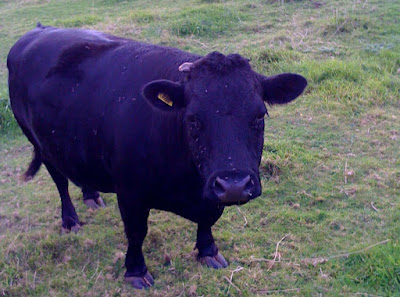 Harriet is a rather lonely cow, suffering from post partum depression. Now, I'd be the first to admit that my knowledge of bovine psychology is a bit, well, sketchy. But she did have a stillborn calf, and she has rather a mad look in her eye.

She lives in the field beside my most recent apiary. So I have added a barmy bovine to the guard sheep at the other apiary, in a bid to gather a Noah's Ark of bee protectors - a Rainbow Army, if you will, of farm animals.
Posted by Stephen at 16:24 No comments:

Email ThisBlogThis!Share to TwitterShare to FacebookShare to Pinterest
Labels: cow

Much to my surprise, two of the three hives that I inspected over the last two days were practically devoid of honey stores.

The two hives have very large colonies and I guess that a lot of bees need a lot of food. The smaller colony in the third hive (that I have complained about in previous posts) is still small, but quite well provided for.

There seems to be a gap between the end of the summer flowers and the ivy coming on stream.

In first photo, I cut a window in the fondant package. 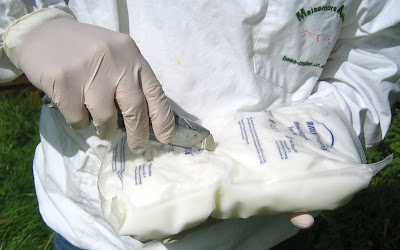 In the second photo, you can see it placed window-side-down over the opening in the top cover (which in this case is perspex.) 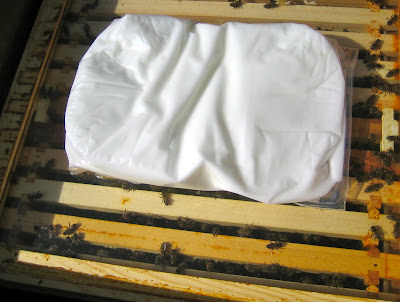 Each bag is 2.5kg of a mix of -oses (sucrose, glucose, etc) that the bees find amenable.

They will take this bagful down into the comb within a week. And at a few micrograms at a time, that's a lorra lorra trips.
Posted by Stephen at 16:13 No comments:

See this huge hornet that I caught (with half a dozen others) in my wasp trap. 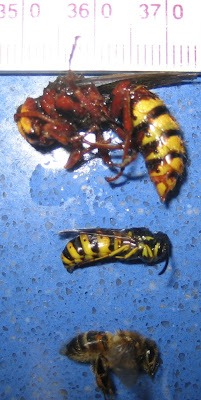 It's almost 3 cm nose to sting. Below it are a wasp and a worker bee. You can see how a few hornets could devastate a hive. 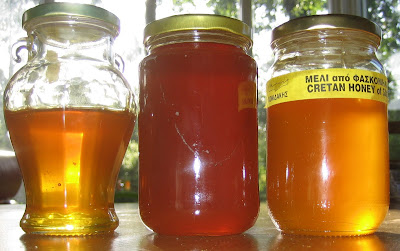 From left to right, they are:
All delicious, needless to say. Cost? Between Euro5 and Euro6 per 225 g jar.
Posted by Stephen at 09:28 No comments: