Sting the day after 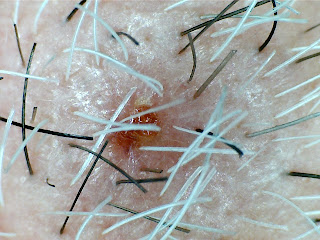 A sting on my chin, photographed the day after visiting the ferocious bees.

They are usually a bit feisty, but doing the artificial swarm on them sent them mad.

I accidentally put my chin against the veil and they got me.

Photo taken with USB Microscope from Veho.  It has all sorts of uses.

Note to self: must get some of that Grecian 2000.  Do they do it for beards? How come Sean Connery looks good with a beard and I don't?

Email ThisBlogThis!Share to TwitterShare to FacebookShare to Pinterest
Labels: sting

Or so I thought.

The objective is to prevent a colony from swarming - so that you get to keep all your bees and not have half take up residence in someone's chimney.

When you see queen cells being formed, here's what you do:

- find the queen (not easy if she isn't marked and not easy if she is, but slightly easier -- you're looking for one bee in 50,000 at this time of year.  A bit like Where's Wally, only all the faces look the same.)

- when you find the queen, put the frame that she's on in a new hive, with new foundation

- move the original hive (with its inhabitants) to a new position, about (say) 5 metres away.

- put the new hive, now with queen and small retinue, in the old position.

Here's the clever bit.  The flying bees (about half the colony) will go back to the hive in the old position, keeping the queen company and fooling them into thinking that they have swarmed.

When you have both hives back to normal, you can either combine the hives to keep your honey production on stream (killing the old queen in the process and keeping the new one), or keep both hives so that you have one more hive next year than you started this year with.

What happened when I did this?

The bees were so ferocious that I forgot to remove a queen cell from the queenright hive and I think they swarmed two days later.  I'm not sure because both hives have lots of bees still.  But the owner of the plot reported "thousands of bees".

I'm going to let them settle down for a week or so and take another peek.

This weather is beyond a joke!

I went to an out-apiary today.  Conditions were not  great -- it was about 10c, but at least the sun was shining and it wasn't raining (for a change).

All the hives are short of stores, and as for filling honey supers -- forget it.

This apiary is sandwiched between two huge fields of Oil Seed Rape (OSR).

Here are the photos.  Can you see what is odd? 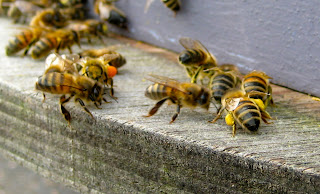 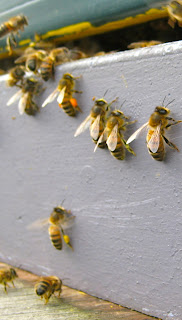 See the two bees with the big pollen baskets?  One has orange pollen (source unknown, but I'm sure someone will tell me); the other has yellow pollen typical of OSR.  And many bees have lemon yellow dusting of pollen on their faces that shows they've been in the OSR.

I thought that will such a massive source of pollen and nectar literally metres away, they wouldn't bother with anything else.

But not so.  The books are wrong, or at least, my bees haven't read them.

(Sorry for the out-of-focus photos.  It's hard to get the focus right with a veil on).