Four out of four ALIVE

I've just been on a cycle tour of my hives - about a 6 mile round trip - on the first mild sunny day for quite some time. We've had freezing temperatures for about a month.

And I'm glad to report that all four hives have live bees. See photos below for proof. I was sure that the weakest of the four would perish in the cold.

I hadn't given them the oxalic acid varroa treatment that I had bought, mainly on the grounds that I am so hamfisted that I would make a mistake and do more harm than good. Second, opening them up in December would surely chill them. Third, who wants acid poured over them in winter? Seems draconian and highly interventionist. Fourth, they are all on new comb this year, so there might not be a big varroa problem.

BUT (and this is a big BUT) the life of the overwintering bees is significantly reduced by varroa. They might be here now in early January, but will they still be here in early March, when (I hope) the queen will recommence laying new brood? We will see. The die is cast now. I don't think putting on oxalic acid now will help matters. Any views?

And Harriet (see previous posts, and top right in photo) now has a couple of friends to lift her out of depression. And the buzzard that lives in the trees behind Harriet's field was there today as well. Always a pleasure to see. 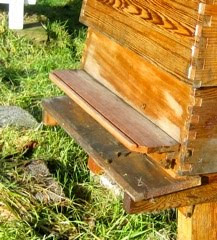 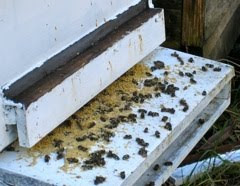 Rather a grotty mess on the landing board. So I swept in off with my gloved hand, only to be rewarded with a sting on the back of my neck. 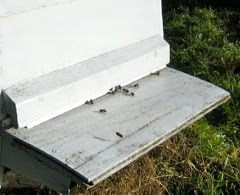 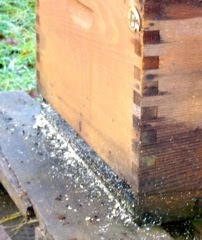 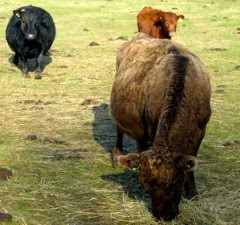