My lovely near-neighbours called me to collect the swarm that issued from their chimney (as it does every year) and what a whopper it was!

Luckily it was hanging from a thin twig that I could cut above the swarm, and then walk the swarm down the ladder.

And then lower them gently into the new hive, provided by another near-neighbour, who is keeping bees for the first time.  Lucky her! 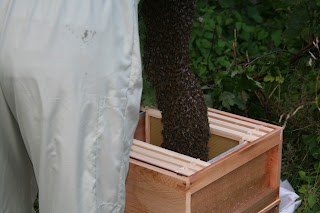 Followed by a much-deserved round of applause (but I affected a show of modesty). 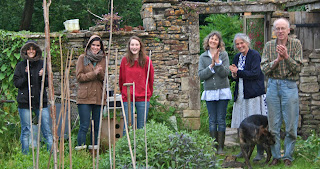 The easiest swarm I have ever collected.

Thanks to my son Tom for the excellent photos.