Setting up a new hive 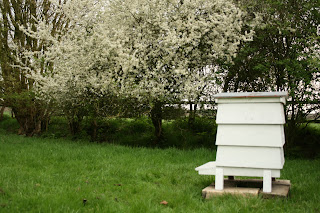 I have bought a second-hand WBC hive from eBay. Nice chap in Wellington, Somerset. It's a bit (wax)moth-eaten, but perfectly serviceable. And being made of cedar, it's light.

I have set it up in a small paddock next to my friends D&D house - and it look splendid against the blackthorn blossom.

It's facing east - so it'll get the morning sun. and get the bees out and about. So - lesson learned (at last) from the hive in my garden, which is under a north-facing wall, and doesn't get a lot of sun.

I have added a vial of swarm-lure. This is an artificial pheromone that will lure any swarm that is within sniffing distance (say, about half a mile). The makers claim that 50-80% of hives set up in this way will attract a swarm (provided the swarms are there at all).

It's a cheaper way of getting bees than paying £150 for a nucleus colony. Although, of course, you get what you get. And that might be a diseased colony with all sorts of maladies. It's a risk I'm prepared to take - because there are no other colonies on this site that would be infected.

The site is protected by these ferocious guard-sheep.

On second thoughts, any herd of animals that are known by their first names cannot be that fierce.